Master of Her Fate; Captain of Her Life 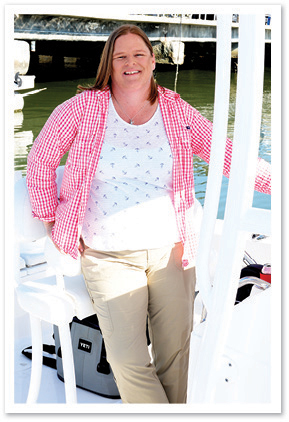 Angela Mullis is a rarity in the world of Master Captains; very few are women.  As a licensed Master Captain, she is authorized to carry up to 12 charter passengers on her spic-and-span, well maintained fishing vessel. A native islander, whose mother just missed an opportunity to be medevaced by helicopter to Savannah when her due date coincided with the breakdown of the swing bridge to the mainland, it’s no wonder Angela has an affinity for the salty nature that abounds in the Lowcountry. Luckily, the bridge was repaired quickly and her mom’s journey to the delivery room was accomplished in the traditional way. The middle sister in a family of three girls, Angela grew up loving the outdoors and absorbing the beauty and symmetry of island life. Shrimping and crabbing in the tidal creeks since a wee tot, she learned early the importance of conserving the abundant marine resources for future generations.

An accomplished high school athlete, Angela led her track team to a state championship, but it was her basketball skills that distinguished her to the College of Charleston with a four-year scholarship. She embarked on a successful medical sales career after receiving her degree that kept her on the road hundreds of miles per week, traversing her Lowcountry territory. After eight years, Angela realized she did not feel fulfilled without the connections with family and the water that had brought so much joy to her life in her youth. She closed her corporate America chapter, and along with her husband, son, and  daughter-on-the-way, moved back to the Lowcountry, settling in Bluffton. She wanted her children to have a childhood surrounded by family and the treasures of island life just as she had. “When you’re raised on the island you carry it forever in your blood and in your soul,” Angela declared.

Angela’s career also turned towards family, as she has worked as a successful residential real estate agent for the past 12 years with her mom and dad, Charles and Frances Sampson, at the Charter One Agency. Happy to be back and with her career on track, the pull of life on the water still beckoned. She pursued her captain’s license, after which she decided to continue her training and coursework to amp up to a master level license, thus expanding her potential charter size from six to 12 passengers.
An avid boater, she has owned three boats in her life. The first was a 17-foot Sea Pro purchased from her father. Her second boat sunk in its slip after a violent storm. She now skippers her beloved Sea Hunt. When asked her boat’s name, she responded with a laugh, “The only one of my boats that had a name was the one that sunk. It was named ‘The Knot Right’ and it wasn’t right that it sunk!” Her new credentials give her the opportunity to spend more time pleasure boating and fishing in the mouth of the May River and exploring beaches and tidal creeks around Daufuskie and the surrounding coastal islands. If there is one lesson she would like the less experienced water enthusiasts to learn, it would be, “Respect the power of nature and especially the sea. The sky can be sunny and clear overhead one minute and just moments later a fog bank can envelope your boat and leave you blinded and unable to find your way to safety.”

The commitment to the marine life and habitat is evident in all that Angela does. She recalls a day when a simple boat ride turned into an up close photo op with a particularly friendly dolphin. She is clearly awed by these mammals’ strand feeding behavior, where a group of dolphins rush their prey, usually a school fish, onto the mud banks, follow them ashore, eating and quickly sliding back into the water. This behavior is not common to the entire species, she explains. Only dolphins from certain areas have been taught by generations before how to hunt using the technique. The bounty of the Lowcountry waters has at least one remaining mystery for Angela: She has yet to see a manatee in the wild, but she’s still searching.

Sense of Place: Lives in Bluffton with her husband, Ned, and their two children Wilson (15) and Page (12).

Award Winning: She is in the Hilton Head High School Hall of Fame.