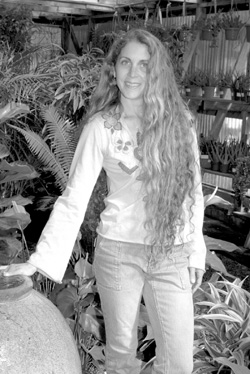 Soon her thick, braided ponytail will reach the backs of her thighs. Her crowning glory and a symbol of her personal growth, Amy Spadafora lets her hair down and shares her wisdom, gleaned from nature over time. Crediting the fruits of the earth with her physical healing as well as her emotional and spiritual well-being, her life's mission is to make a positive contribution to our planet.

Amy came into this world with special connections-no silver spoon, rather an innate passion which has led her to a career and way of life she loves.

"Basically, I came out loving plants," said Amy, explaining that she thinks of them as living beings, almost like people. It is through this personal appreciation of nature's gifts that she has reached an understanding of herself and others and a deep respect for her role as an ambassador of the earth.

Born and raised in a town that was little more than a patch of woods dotted with horse and cattle farms, Amy spent most of her time outdoors. And she still does. "If I had to sit inside all day, I would freak out," she said. As general manager of the Greenery's retail division at both the Hilton Head Island and Bluffton locations, she might be unloading trucks, pruning plants, creating displays or working with customers, but one thing is certain: she's diggin' it!

Vacationing on Hilton Head Island since 1976, Amy moved here with her parents in '89. She graduated from Hilton Head High School and, at age 20, began her career with The Greenery, working part-time in sales before taking a full-time position.

At age 29, a chronic illness took her on a detour which proved to be the journey of a lifetime. "I didn't like what the doctors were telling me," said Amy. "I decided to take responsibility for my own health, which included herbs, diet and a new way of living."

She picked up a book called The Way of Herbs, by Michael Tierra, and there it was-a combination of herbs that would help bring balance back to her body. A woman in Beaufort helped her put the formula together, and for the next four months, she drank a gallon of it a day. Her condition was gone.

"In using the herbs that way, I wanted to learn this to share it with other people: It is possible to take responsibility. There is another way. And it's a very old, time-tested way of taking care of yourself," she said.

Amy moved to Boulder, Colorado, where she attended The School of Natural Medicine, serving as an apprentice for two years and running the school for another year along with her teacher. Returning to the Lowcountry with an even greater appreciation of plants and a fervent desire to work with nature, she went back to The Greenery full-time.

For the past five years, Amy has been in a management position, and she is grateful to Greenery owner, Berry Edwards, for recognizing her potential. "Mr. Edwards saw something in me I couldn't see in myself. He gave me the opportunity to blossom," she said.

"It is totally creative," she continued. "This industry is evolving into something that is more than just 'I want pretty flowers in my yard.' It's being conscious of the fact that everything we do to this planet affects everything and everybody around us. It takes some time to educate people. It's an issue globally. Maybe we can't change the world, but we can change what we do in our own backyard."

Up Close
Originally from: Lebanon Township, NJ Lowcountry resident: 20 years Lives with: her cat, Lucky When not working at The Greenery, find her: digging in her own garden Describes herself as: loyal, witty, grateful, blessed She admires: Native American elders Life motto: Live and be happy Future plan: "To play my part in helping preserve our planet for the generations to come."