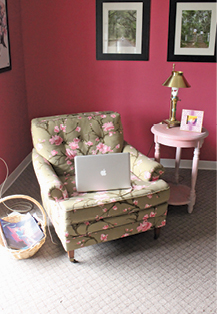 Every June for the last 11 years, we have featured local men in an article I dreamed up called Men and Their Chairs. I starting thinking about how most men seem to have a special chair—kind of like Archie Bunker, Frasier’s dad or my dad. I wanted to honor men during the month of June because I have met so many wonderful guys who have very cool stories to tell.

While Pink is a women’s magazine, we, by no means, dismiss men. Many men have made a difference in my life. The college English professor, Dr. Rice, who told me my writing was the most elegant he had ever read in his college career—and I was a business major! He made a difference in my life. My father—who my mother says I’m just like (with a little disdain, I might add)—gave me the gift of gab and the ability (and permission) to talk to anyone and everyone. He also gave me my sense of humor, my sense of the more the merrier and my curly hair. Jim Hunter, who was the President of Darlington Raceway and my boss, believed in me, even though he fired me (it was political and showed me even a great man can fall to politics). He wrote a poem about my enthusiasm, he encouraged my ideas, and he let me make a difference and soar...and I did.

There have been so many more, as I am sure there have been for you. Sometimes I get asked why I would choose a cover art piece created by a man, or why I would quote a man. Well, there are several reasons, although I feel both are narrow-minded questions.

I mean life wouldn’t go on without men. Seriously, try to have a child without one.

In my mind, balance is always the answer, and there would be no balance without both masculinity and femininity. Besides, men lay claim, along with women, to some of the greatest works of art and literature ever created. I would be worse off for never having experienced Shakespeare, Michelangelo, or Matthew McConaughey.

We started an article in January called Motivational Man. It gives us the opportunity to feature one man per month that is doing cool things. This article has been well received and is a welcome addition for all of our male readers, too—and we know you’re out there!

So back to Men and Their Chairs. Every year we go looking for a few good men and never have a problem finding them. We give them questions to answer, and take a picture of them in their chair. I always thought the questionnaire would be fun to answer, so I decided to give it a go. It was hard! Nonetheless, here are my answers to this year’s Men and Their Chairs questions, and to read about the men we chose click here.

My favorite motto or words to live by: “What’s the worst that can happen?” and “Let’s get ‘er done!”
Something about me that would surprise people: I had panic disorder for more than 20 years. Sometimes I even had trouble driving to my parent’s home in my hometown, which was only 90 minutes away. It was truly debilitating. I cured myself with a lot of introspective life coaching—getting to know myself, and honoring who I really am. I just came back from a trip to Mexico, where I was hanging in the depths of the town with the locals. I would have NEVER done that back then. In fact, I said I would never take a cruise because it scared me to be somewhere I couldn’t leave—I’ve now been on three. Love it!
One thing I hope to see in my lifetime: Personally, I want to see me become a well-known author and public speaker. I absolutely love inspiring and talking with people and making them laugh. Globally, I want people to see that anger and aggression is not the way to solve anything. I mean in all things—ISIS, North Korea, domestic and child abuse, backstabbing and betrayal. It all needs to go. For women, I want to see the end of snootiness and see women truly support other women—no one is better than anyone else.
One of the craziest things I’ve ever done: I’ve done a LOT of crazy things but one of the craziest—and creepiest—was going on a self-appointed writing assignment that took me to stay a weekend at a stranger’s mansion in Georgia. I’m sooo glad I took a girlfriend with me. The story ended up being very interesting, but it was beyond weird.
My perfect day off from work would be spent: Hanging out with Adam Sandler and my buds, laughing until I’m crying. My favorite thing is laughing!
My greatest career achievement: Starting a company from nothing that has lasted 14 years. And, we have held true to our mission since day one: emPower, Inform, eNcourage and evoKe thought— no fake news or negative here!
One piece of advice you would give to your 18-year-old self? Stop eating.
Something I HAVE to accomplish before I die? Get Adam Sandler to the phone. And do one stint of standup comedy.
What you should know about my chair: I never sit at my desk, so I don’t really have a specific chair. However, I love to cozy up in one and just write. My favorite chair is where ever I can plug my laptop in—home, office, Starbucks, the Westin lobby to name a few.
If my chair could say something about me, it would say: “Who are you?” And I would reply, “Be quiet. I’m writing.”