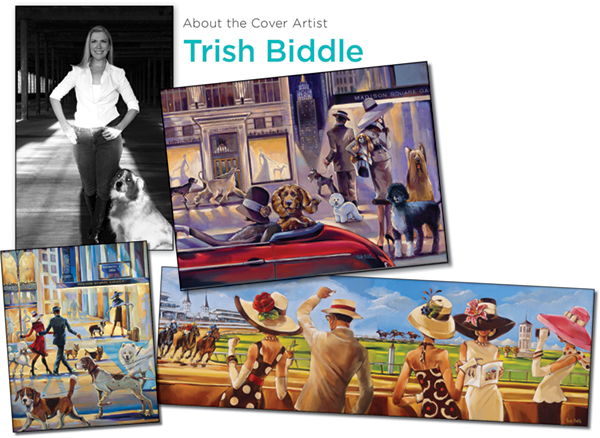 Trish Biddle grew up in Minnesota, in the world of art, along side her mother who enrolled her in every art class and contest in which she would usually come in second place. This made her work even harder. On her own, she moved to Dallas fresh out of high school, ultimately graduating from the Dallas Institute of Art.

Pursuing her artistic dream, Trish secured a job as a textile designer and a fashion illustrator for a clothing manufacturer. She later moved to the J.C. Penney home office in the design department. After several years in the corporate world, she decided that it wasn’t for her, so she went to work as a freelance artist. She was signed by a textile agent in New York City and continued to freelance for several years.

In the summer of 1996, Trish’s beloved grandmother passed away and Trish was given an old cigar box full of vintage photos. She took the next couple of years to reflect and be inspired by these photos, realizing it was time to pursue her dream of being a full-time painter. Trish was signed by her publisher, Canadian Art Prints, Vancouver B.C., in 2003 and produced more than 40 images currently being sold in retail outlets around the globe.

Trish’s expertise in capturing nature and light creates richly colored, breath-taking canvases. Her paintings reflect the Art Deco era to such a convincing degree you can’t help but wonder how she transported herself to capture that lovely era. Her motto is to inspire others, especially girls and women, helping them reach their goals by setting a positive example.

Trish has given back to the community by contributing original artwork to charity, which has been more rewarding than any amount of fame. A few of the organizations include Girl Scouts, Make a Wish Foundation, Shining Stars, Arts Net, Greater Southlake Women’s Society, Southwest Transplant Foundation and more.

Her art is available for purchase only at www.trishbiddle.com and through Facebook. Trish has had over $1 million in retail sales and been commissioned by Hilton Hotels, Churchill Downs, Westminster Kennel Club, Del Mar Thoroughbred Club and was named Sarasota Polo Club Official Artist 2016. Actress Eva Longoria Parker is a fan of Trish’s work, and used her art for her charity, Padres Contra El Cancer, in Los Angeles.

To purchase or view more of Trish Biddle’s work log onto www.trishbiddle.com
or visit her Facebook page.