A Glimpse at Rebekah Faulk Lingenfelser’s Memoir with Recipes, Some Kinda Good 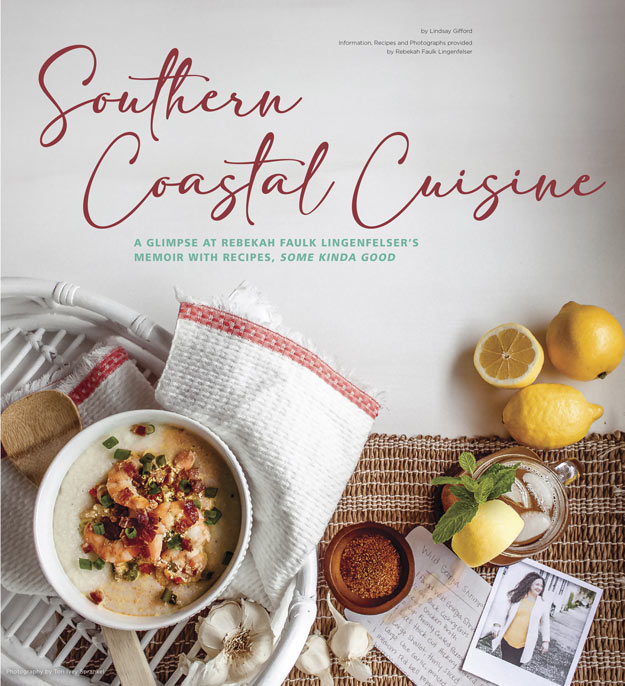 “Good Food and Good Company, That’s What It’s All About!” 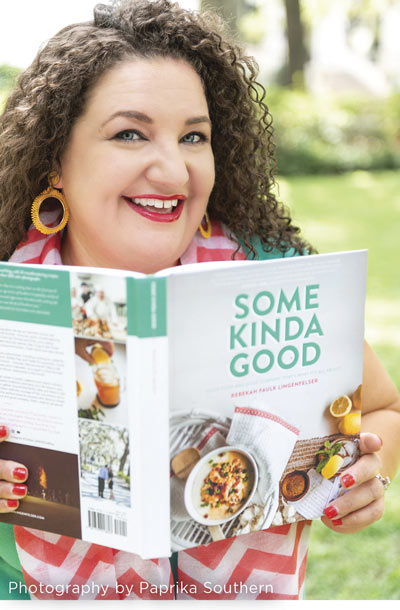 Private chef and Georgia native Rebekah Faulk Lingenfelser recently released her debut memoir with recipes, Some Kinda Good: Good Food and Good Company, That’s What It’s All About. Seasoned with southern sass, her book serves up heartfelt stories and easy-to-execute recipes from her Savannah kitchen.

After high school she headed to college to pursue a degree in public relations. She then landed her dream job, working in healthcare public relations in Charleston, SC, a city known for food. Her two passions were fulfilled. Then suddenly, she found herself on the wrong end of budget cuts. Shattered, she moved to Savannah to start anew.

After six months, when no full-time job had yet surfaced, Rebekah discovered her silver lining—a grant for dislocated workers. The grant allowed her to pursue her passion for food through all-expense-paid culinary school.

From there, her brand “Some Kinda Good”—originally developed in 2011—continued to flourish. With an emphasis on Southern coastal cuisine, she documented her food journey through her blog www.SomeKindaGood.com. The blog is peppered with cooking and entertaining tips and flavorful recipes to share around the family table—evidence of her enthusiasm and passion for good food and good company.

In pursuing her ultimate goal of combining her marketing and public relations experience with culinary prowess to have her own cooking television show, Rebekah began heating up her resume with food travel, cooking for celebrity chefs, national TV cooking competitions, and becoming a food contributor for Discovering Bulloch, Southern Soil and Effingham Living magazines. She’s been featured in Forbes, on season fourteen of “Food Network Star,” ABC’s “The Taste” and “The VeryVera Show.” She is also the longtime food columnist for the Statesboro Herald.

A culmination of her adventures thus far, Rebekah’s  best-selling memoir has been described as a “collection of easily digestible short stories and a book to savor” complete with restaurant reviews and recipes throughout. So pull up a front row seat to Rebekah’s culinary adventures, including cooking for celebrity chefs Anthony Bourdain, Marcus Samuelsson, Bobby Flay and Giada De Laurentiis. Take a ride through Georgia from Atlanta to the coast and everywhere in between, on a quest to find the best bakeries, brunch, lunch and dinner restaurants in the South.

No matter where she has journeyed, Rebekah still believes the most important ingredient in every recipe is gathering around the family table to share the joy of food and fellowship. To join her food community, find more delicious recipes, Southern sass and live cooking demonstrations, follow Rebekah on social media with her handle @SomeKindaGood on Facebook, and
@SKGFoodBlog on Instagram and Twitter. Enjoy these recipes we picked from Rebekah’s treasure trove of delightful tastes.

Cook grits according to package directions, using chicken broth in place of water. Season with salt and pepper, then add butter and stir in Parmesan cheese. Meanwhile, cook bacon until crisp. Drain on paper towels and set aside. In the bacon fat, sauté the shallot, bell pepper, jalapeno and celery. Cook for 3 – 5 minutes, until vegetables become fragrant and translucent. Add garlic and stir for about 30 seconds. Once vegetables have married together, add the white wine and bring to a boil. Let cook for 2-3 minutes, reducing the liquid slightly. Stir in milk and bring to a boil. Reduce heat to medium-low and simmer for 5 minutes to let the sauce thicken. Season with salt and pepper to taste.

Season shrimp with Old Bay. Add shrimp to sauce and stir. Increase heat to medium, and cook shrimp until they turn pink, about 3 – 4 minutes. Remove from heat. Be careful not to overcook the shrimp.
To plate, heap grits onto a plate and top with shrimp and sauce mixture. Garnish with crumbled bacon and green onion. Enjoy! 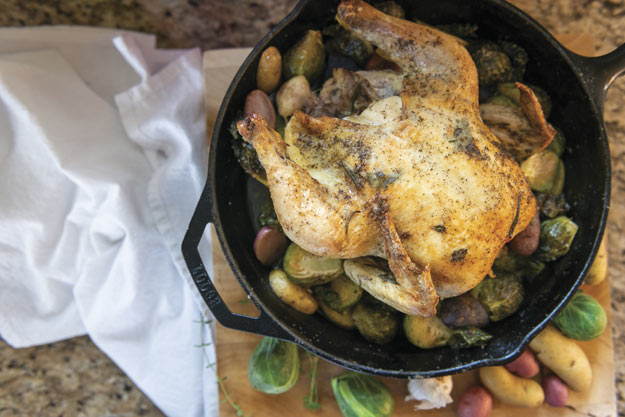 Dress the bird by squeezing the juice of half a lemon over the outside, then place the other half of the lemon inside the cavity of the chicken. Next, slather the bird with olive oil and season it liberally with salt, pepper and dried herbs. If possible, dress the bird a day in advance, and when you’re ready to cook it the next day, remove it from the refrigerator and allow it to reach room temperature before roasting.

Pile the chopped vegetables in the center of the cast iron skillet. Season them with salt and pepper, and toss them all together with a teaspoon of olive oil. Set the chicken on the top, breast side up. Pour ½ cup of chicken stock into the pan. Roast in a 375-degree oven for 1 hour and 20 to 30 minutes. Before serving, allow the chicken to rest 5 to 10 minutes. Remove the chicken from the vegetables and turn the oven up to 400 degrees. Roast the vegetables in the pan for about 10 minutes, until they are browned and crispy on top.

If desired, make a pan gravy with the drippings. Remove the vegetables from the skillet and keep warm. Add 2 tablespoons of flour to the drippings and cook on medium heat, scraping the browned bits from the bottom of the pan. Slowly whisk in a cup of chicken stock and stir until thickened, seasoning with salt and pepper to taste. Add more stock if needed. Add two tablespoons of butter, and stir until it melts. Serve over rice, alongside the roasted chicken and vegetables. 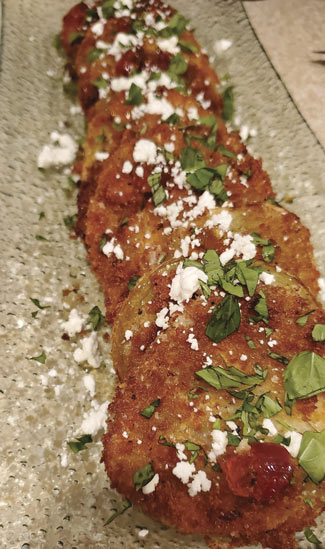 Slice tomatoes about ¼ of an inch thick. Place them in a colander and season with salt. Allow them to drain in the sink for at least 30 minutes. Meanwhile, fill a cast iron skillet or 10-inch frying pan with vegetable oil halfway full and set over medium heat. The oil will be ready for frying when sizzling occurs after gently sprinkled with water. Set up a dredging station: In a small dish, use a fork to combine the cornmeal, flour, Old Bay, salt and pepper. In another small dish, combine the beaten egg with water or milk. In another small dish, combine the Panko bread crumbs with garlic powder. Dredge the tomatoes in the flour mixture, ensuring both sides and edges are evenly coated. Then dredge in the egg wash, followed by the bread crumbs. Shake off any excess before dropping the tomato slices into the hot oil. Fry the tomato slices until golden brown, turning once during cooking.  Remove them from the oil and drain on paper towels. Place about 1 tablespoon of red pepper jelly on a serving plate and spread. Top with three fried green tomatoes per serving. Garnish with crumbled goat cheese and fresh basil. 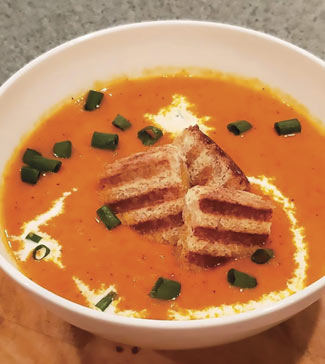 For Tomato Soup: Preheat the oven to 450 degrees. Slice medium tomatoes into quarters and heirloom tomatoes in half. Spread onto a large baking sheet, along with smashed garlic cloves and onion. Drizzle with olive oil and season well with salt and pepper. Toss everything together using clean hands. Roast for 30 minutes. Once vegetables have roasted, if using an immersion blender, transfer vegetables to a large stockpot set over medium heat. Add chicken broth and season again with salt and pepper. Blend vegetables to desired consistency. Turn the heat to high, cover with a lid and bring to a boil. Reduce liquid until thickens about 2-3 minutes. Turn heat to low and simmer for 15-20 minutes. Serve soup in a bowl, with a splash of heavy cream. Garnish with grilled cheese croutons and green onion.
For Grilled Cheese Croutons: Butter one side of each slice of bread. Using a panini press, place one slice of bread butter side down on the grill. Top with cheddar cheese, followed by the other bread slice (butter side up). Close the lid and grill until the cheese has melted. Remove and slice into nine cubes. If you don’t have a panini press, simply make a grilled cheese sandwich and slice into cubes. 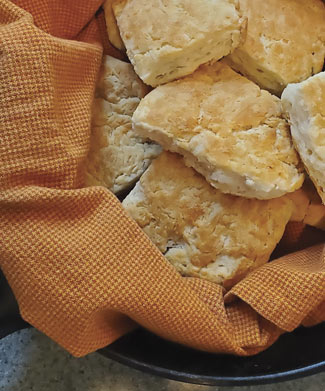 Preheat the oven to 450 degrees. Grease a small baking sheet with butter spray. Set aside. In a large bowl, place flour. Using a pastry blender or your fingertips, cut butter into flour by working quickly with a snapping motion until mixture resembles pea-size crumbles. Make a well in the center of the bowl, and pour buttermilk. Gently fold the milk into the flour mixture, just until combined. The mixture should resemble a cottage cheese-like texture.

Dust a clean work surface with flour. Dump mixture onto surface and knead by turning dough onto itself 3 to 4 times. Pat the dough out into a rectangle, about 1/4 inch thick. Cut into 9 squares and place on a greased baking sheet so that biscuits are touching slightly. Brush tops of biscuits with butter. Bake for 12 – 15 minutes until biscuits are golden brown on top and bounce back when poked. Serve with
honey, jam or syrup and butter. 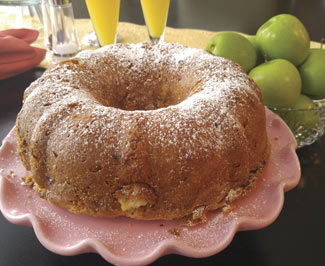 In a large bowl, beat the eggs, oil and vanilla. Add apples and sugar; beat for 1 minute. Combine the flour, cinnamon, baking soda, salt, nutmeg and baking powder; add to apple mixture until blended. Pour into a greased and floured 10-in. fluted tube pan. Bake at 325° for 50-60 minutes or until a toothpick inserted in the center comes out clean. Cool for 10 minutes before removing from the pan to a wire rack to cool completely. Using a sifter, sprinkle evenly over the cake confectioners sugar.

For more great stories and recipes, get your copy of Some Kinda Good today at www.rebekahlingenfelser.com/book, Barnes & Noble or Amazon.