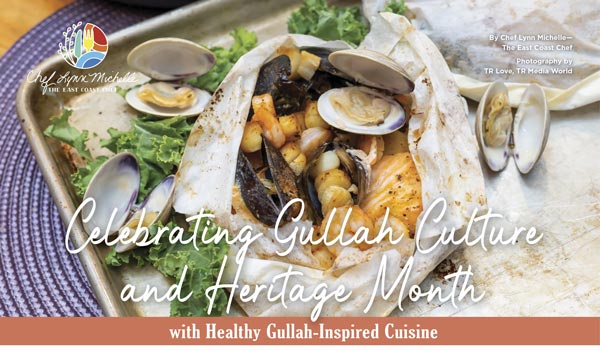 February has traditionally been a month to celebrate Gullah Heritage, and there’s perhaps no better way to honor and celebrate this than through Gullah cuisine. Stemming from the Gullah-Geechee community, Gullah cuisine is a unique blend of African and American cooking methods, which has evolved into a taste unique to the Lowcountry and Coastal South. Gullah cuisine is embraced by locals and visitors, with many dishes considered classic Southern favorites having their roots in Gullah culture, including rice, a Southern staple. Our area has long been known for rice due to the environment and the Gullah community’s expert rice cultivation techniques. In fact, the mass production of rice and its availability helped one-dish meals become common meals in Gullah cuisine.

Many Gullah classics like shrimp and grits, gumbo and Frogmore Stew (also known as Lowcountry Boil) have long been popular dishes. In addition, Gullah history and culinary traditions are behind many of the one-pot dishes of the South. Other key ingredients include okra (used in gumbo or pickled), fish stew, cooked-down collard greens, beet and turnip greens, as well as local fresh oysters and succulent shrimp.

With many Gullah recipes based on rice, simmered vegetables and local fresh seafood, turning Gullah classic dishes into healthier versions of the originals – and coming up with some Gullah-inspired Keto/gluten-free/sugar-free recipes -- is a great way to enjoy the unique flavors of Gullah-Geechee cuisine. From a curried carrot soup that is vegetarian/vegan and gluten-free/sugar-free to a unique (and healthy) use of collards in a Seafood en Pappillote that is incredibly tender and flavorful, these Gullah-inspired dishes are not only bursting with the distinctive flavors of the South, but are simple to prepare, making them a great addition to your at-home healthy dinner menus.

In honor of Gullah Heritage this month and all year long, enjoy the influences of Gullah-inspired cuisine, filled with healthy ingredients, history and tradition. You will love the distinctive tastes and health benefits that make these recipes new classics for generations to come. LET’S EAT!

Preheat oven to 450°F. Cut two 18x15-inch pieces of parchment paper. Fold the long side in half and cut into a heart-shape. The parchment paper should be large enough to contain one portion of fish and vegetables when folded in half. Brush each piece of parchment paper with olive oil.  Toss the sliced onions, collards, and shredded carrots together in a small bowl. Evenly portion the vegetable mixture on half of each piece of oiled parchment. Place one portion of the fish on each portion of vegetables, season generously with seasonings. Top each portion of fish with ½ teaspoon of lemon zest, and 1 teaspoon sliced green onions. Place scallops, shrimp, mussels, clams, and crab meat on top of fish. Add 1 tablespoon of butter on top of each and season lightly once again. Fold the other half of the parchment paper over the fish and vegetables. Starting at one corner, tightly crimp the edges of the paper to seal it tightly. Place the pouches (papillote) on a sheet pan and bake for 12-14 minutes. When baked, the parchment paper should puff up and brown slightly. Remove from oven and serve immediately. Transfer the envelope to a plate. Carefully cut open and served with a lemon wedge.

Heat oven to 400°F. Cover baking sheet with parchment paper. Wash and remove the green stem part from cauliflower, keeping whole. For the deviled mixture: In a medium sauté pan, add 2 Tbsps olive oil, peppers, onion, and celery and cook until translucent. Let cool. Gradually add almond milk, mix together and set aside. In a small bowl, mix gluten-free bread crumbs, seasonings and eggs (or vegan eggs). Mix pepper mixture in when cool (you may need to add more almond milk). Set aside.

With a large sharp knife, slice cauliflower into “steaks,” cutting across the entire head of cauliflower. (The internal stem will keep the steaks intact.) Place cauliflower “steaks” onto the parchment paper. Coat with olive oil on both sides and season with salt and pepper. Put baking pan in the oven, and roast for 20 minutes. Remove from oven, and place a scoop of the “deviled mixture” to the top of each cauliflower steak. Place back in the oven and bake until golden brown—around 12 minutes. Serve Hot! Notes: 1) For a pescatarian option, add crab meat or shrimp to the deviled mixture. 2) For Vegan Egg: mix 2 Tbsps flaxseed meal with 6 Tbsps water and let set. 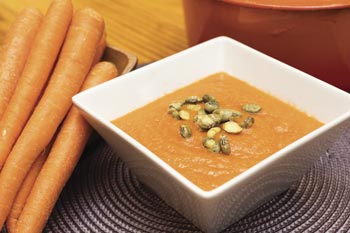 In a medium Dutch oven, sauté onion, carrots and apple in olive oil until translucent. Add lemon peel and seasonings. Let cool and place mixture into a large bowl. In a blender or food processor, blend the vegetable mixture with some of the vegetable broth until smooth, leaving a little texture. Pour puree mixture into the Dutch oven, and add the additional broth to the pot. Heat thoroughly. Reduce heat and gently stir in the heavy cream and sour cream. If desired, stir in sherry. Top with toasted pumpkin seeds, croutons, green onions, chives, or toasted almonds. Note: you may also add 1/8 tsp cinnamon and 1/8 tsp turmeric for added flavor. 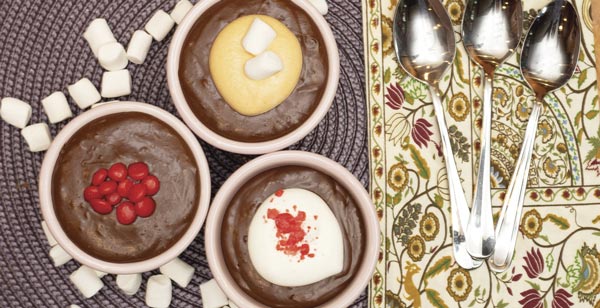 Place all ingredients in a large bowl, except for almond milk, and blend on low.  Gradually add almond milk and mix on high until light and fluffy. Place in small individual dishes (ramekins) and refrigerate.

Pour heavy whipping cream into a large bowl. Add vanilla and cinnamon. Beat on high until the cream forms stiff peaks. Carefully fold in the sweet potato puree until blended. Place a large dollop on top of the Chocolate Mousse. Add the slightly crushed Red Hot candies to the top as a garnish.